LinkedIn announced on Thursday it has taken user photographs out of in-house ads after a wave of complaints and criticism from members and industry observers. 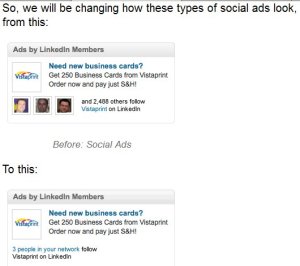 LinkedIn made an opt-out change in its privacy policy which allowed member data to be used in its “social ads”.  Because the new policy was opt-out, some criticized the company for trying to quietly slip it by users with as little notice as possible.   Ryan Rolanski, director of product management for LinkedIn, said its guideline changes were transparent and noted they were published two times on its official blog – once when it was making a small test and again when it launched social ads.

Rolanski said in his blog post on Thursday that since the social ads launched LinkedIn has been getting feedback from users and “we hear you loud and clear.”  Rolanski explained that member photos will no longer be  used in its social ads because: “The trust of our members is central to what we do, and we always aim for clarity, consistency, and member control in all matters related to privacy and data. “

Rolanski conceded that LinkedIn could have been more clear and communicated better about its plans for social ads and acknowledged that some LinkedIn members may not be “comfortable with the use of their names and photos associated with those actions used in ads to serve their network.”

Criticism from LinkedIn users became more intense after Paul Ducklin wrote on Naked Security about the new opt-out feature LinkedIn seemed to be sneaking in, noting that its Privacy Policy is 6,400 words long.

And blogger Steve Woodruff’s seethingly sarcastic post the same week slammed LinkedIn for implementing the change writing: “Apparently, LinkedIn has done us the “favor” of having a default setting whereby our names and photos can be used for third party advertizing.  A friend forwarded me this alert (from a friend, from a friend) this morning. Devious. And I expect that you like me don’t want to participate. “

No I don’t… thanks Steve.