LG is set to deliver an Intel Medfield Android device by January 10, the day that the Consumer Electronics Show (CES) 2012 will kick off.

The phone maker and chip maker have already collaborated before on the Intel Moorestown-based LG GW990 but when CES 2011 came, both companies decided to pull out the project because of lack in product marketability.

Although the joint effort did not materialize during the first major tech event of each year, LG and Intel still want to push through with an Intel-powered LG Android device, with a high-ranking LG exec telling the Korea Times, “LG Electronics will produce Intel’s first Android smartphones that use Intel’s own mobile platform. The device will be shown at the CES.”

Intel, the world’s largest chipmaker, has not been a major factor in the mobile market as opposed to rival ARM, which produces most of the chips used on mobile devices today.

The move falls in line with Intel’s ramped up effort to slice a decent share in the mobile market.

Lee’s confirmation of the announcement is regarded as “very rare,’’ as the company tends to be tight-lipped on any crucial issues.

However, not all of LG is hopeful on the company’s future with Android saying, “Personally, I doubt that LG Electronics will release phones running on Android software based on any Intel platform. It’s quite possible for LG to push Intel’s reference mobiles but with huge subsidies from Intel for promotion,” an LG executive who wants to remain anonymous told the Korea Times, tech site BGR reports.

Despite thwarting the company announcement, the unidentified source said that the Intel phone would likely hit shelves from March at the earliest.

LG and Intel have been partners for some time now, which shows the former’s heavy dependence on the chip maker, with almost all LG Electronics’ laptops using Intel chips. 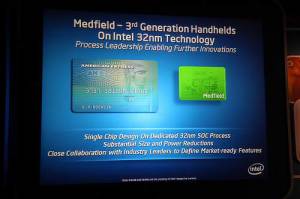 Intel, rather than paying companies to build hardware, offers ad funds to OEMs to make devices based on its chips in the form of cooperative advertising, which circumvents the company from antitrust laws for anticompetitive practices, some officials told the Korea Times.

The recent promotion of the new wireless display (WiDi) technology fortified LG’s growing dependence on Intel as a partner.