Most marketers will agree social media provides an unprecedented way to reach customers. However most will also agree that gathering relevant return on investment (ROI) measurements to their campaigns is nearly impossible. The best practices from traditional marketing don’t exactly apply, and many people are too caught up with things like fans and followers, which can do wonders for your ego but don’t impact the bottom line one bit. But just because it’s hard doesn’t mean it’s impossible. There are several ways to determine the actual ROI of your social campaigns.

Of course you need fans and followers. Without them, your message isn’t getting anywhere. But while these make for great key performance indicators (KPIs), just having great numbers is not a measure of your overall campaign’s success or ROI. Instead, you need to look at the level of engagement from that audience. On its face, a campaign that reaches 1,000 people is not as good as one that reaches 10,000. However if the smaller one gets 100 shares, like, or retweets and the larger only gets ten, then that changes things.

Facebook does a good job breaking that data out for brand page administrators through their insights feature. It shows not only the number of viewers, but also how many people created their own story from your post by liking, commenting, or sharing it to their friends. This gets even more detailed for posts like videos or photo albums, showing the number of times it was played or viewed.

i Facebook’s insights for brand pages

Google Analytics is also ramping up their reporting as it relates to social media marketing. Another good KPI is the social engagement report. This shows the traffic from each social platform as well as from specific posts. Comparing things like your bounce rate and percentage of new visits from one platform to the next, as well as from one post to the next, can help you optimize the type of content you’re putting out there.

Do dig even deeper, try the social graph report. This is a graphical representation of how visitors are making their way to your site from social networks along with what they’re doing when they get there. The example below is from our analytics, and shows how this graph can clear up things for you. Based on the traffic alone, we assumed the ads we ran on Stumble Upon were a big hit. However, after viewing this report, it’s clear those visitors were not interested in what we had to offer. 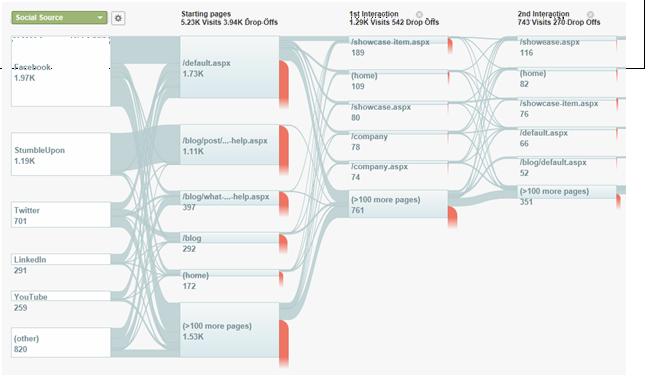 Taking things one step closer to actual ROI is the FRY method, which author Oliver Blanchard creatively wrote about. While we all know correlation doesn’t prove causation, it still helps put things in perspective. The FRY method basically takes a look at your sales frequency, reach, and yield. Graphing those numbers alongside your social media metrics (the engagement metrics, not just the number of fans and followers) can give you a high level view of how your campaign may be impacting your bottom line. Again, this is a nice thing to look at and show management, but still isn’t a true measurement of ROI.

The holy grail of measurement is attainable, as long as you have the right tools in place. One important component is to setup conversion tracking through Google Analytics or another analytics package. A conversion could be a sale on an ecommerce site, or something like a proposal or appointment request. Among Google’s social tracking suite is the social value report, which tracks these conversions for your site overall while breaking out those visitors that came from social networks. It categorizes those visitors in to two groups: assisted social conversions and last interaction social conversions. The first includes people that had a social interaction somewhere along their conversion path. The second only includes users who came directly from a social source to a conversion. 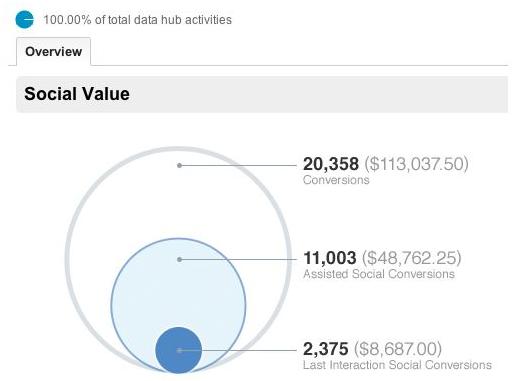 The second and easiest way to track social media ROI is by moving the transaction so it takes place right on the social network. Again, this comes back to the questions of what constitutes a conversion for you. For example, you might run one campaign focused on sales of a certain product while another is focused on attracting job applicants. Retailers like Express have actually taken their catalog and moved it to an app within Facebook. Literally every step of the shopping process up to taking the payment information takes place on the network. This not only makes the experience seamless for the customer, but gives Express a clear view of the impact social media marketing provides.

In the second example of a recruiting campaign, it is much easier to create a form on Facebook. My company has taken this approach, marketing to potential intern candidates on Facebook and encouraging them to complete the application right on our brand page. When you consider that most users don’t go to a social network with the intention of buying a product or even networking with a brand, you realize you’ll have a much better chance of a conversion if you bring the information to the user. In the case of intern applicants, getting them to leave Facebook is like getting a teenager to turn off the Xbox and come to dinner.

So no, measuring ROI from social networks is not an exact science or even an easy process. It requires some reworking of your analytics, and even your social presence. But once setup, it can take social media marketing from something you have a good feeling about to something that you can easily justify as part of your marketing mix.

This guest post was brought you by Peter VanRysdam who is the chief marketing officer at 352 Media Group, a custom web development and digital marketing company. He’s a regular contributor for Mashable and a professional speaker on social media topics for SMX.

Co founded Social Barrel in 2010 to bring the latest Social media news and tips to other social media junkies! Connect and stay updated on Twitter