Home » Instagram’s “Pinned Comment” feature is now live for everyone

Instagram’s “Pinned Comment” feature is now live for everyone 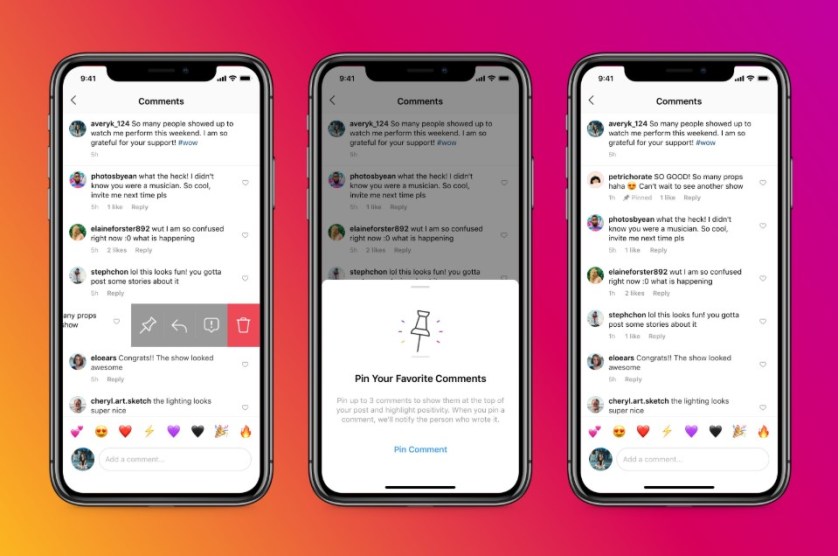 A new feature that lets pin any three comments on a post to the top of a thread has gone live on Instagram. This is coming after months of testing the feature; with a handful of users gaining initial access.

Instagram announced the new feature via its Twitter page on Tuesday; and will now hope that it helps to curb or reduce abusive behavior on the platform. Allowing users to pin comments to the top of a thread allows people to better manage the conversation. As a matter of fact, the feature allows you to set the tone of the conversation—serving as a guide to help guard against negative comments.

To pin a comment to the top of a thread, simply swipe left to the options for reporting, deleting, and replying. On the far left of those three options, you would see a pushpin icon.

That means you can a pin a few comments to the top of your feed post and better manage the conversation. pic.twitter.com/iPCMJVLxMh

Still on Instagram, but this time something slightly different; the social media giant has reportedly began testing Instagram Reel in the country. This, coming only a couple of days after TikTok and 58 other apps were banned in that country is no surprise—quite a large number of tech writers and social media commentators had predicted this. Per Business Insider, Instagram Reel, which lets you shoot 15-seconds video with music and audio clips and add them to your stories, is now being tested in India.

Citing sources, Business Insider reports that some users have started receiving updates from Instagram that includes Reels. “We’re planning to start testing an updated version of Reels in more countries. Reels is a fun, creative way for people to both express themselves and be entertained. We’re excited to bring this new version to more of our global community. No further plans to share on launch date or countries for now,” a Facebook spokesperson said per Business Insider.

Just as Reel begins to get serious attention from Facebook, one app that will no longer be accessible to users from this Friday is Lasso. Facebook has decided not to continue its expensive attempt at cloning TikTok as Lasso will no longer be available from July 10. While the social media giant has announced it will no longer make Lasso available from next Friday, no one can actually bet against another future dive into such venture especially as TikTok continues to do fine in the market.

Lasso, which was launched a year and a half ago allowed users to shoot 15-seconds video. In a statement per TechCrunch, Facebook confirmed that the app is being discontinued, but failed to provide answers as to why this decision was taken; though, your guess is as good as mine.