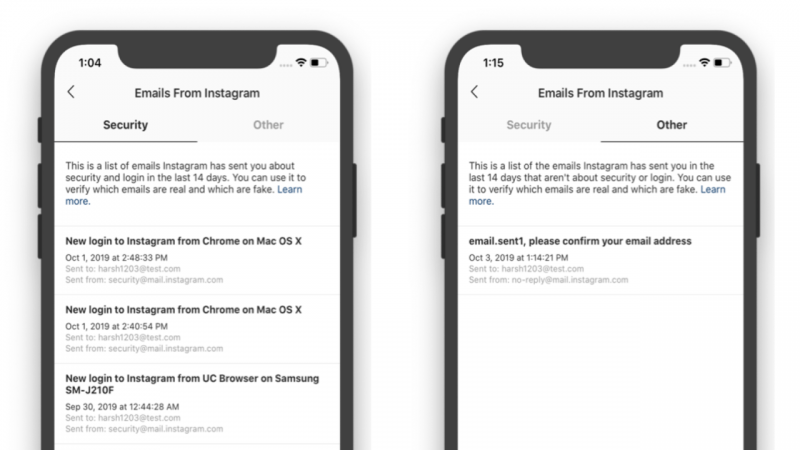 One cannot be too sure about the emails we receive from Instagram these days. There are tons of emails doing the rounds supposedly from Instagram, but are actually from phishing sites—and Instagram has a new way to identify them. The Facebook-owned company has today announced a new feature that is aimed at helping you to identify phishing emails.

The new method of checking the authenticity of an email from Instagram involves going into your account settings, and visiting the “Emails from Instagram” tab to get a list of every Instagram’s correspondences received earlier from the company.

Per PC Mag, Instagram in a statement said: “Bad actors are getting better at imitating emails from Instagram, and it is becoming increasingly difficult for people to distinguish between a genuine email and a fake one.”

Sometimes it is difficult to identify such emails as they often look like the real one. Senders of such emails use Instagram logos, which tend to confuse the recipients—and that makes this latest move by the social media giant a very crucial one.

“We discourage people from clicking a link in an email that claims to be from Instagram if they can’t confirm we sent it. If someone accidentally clicks a suspicious link, they can request to secure their account here,” the Facebook subsidiary added.

In other news, the picture-sharing app has confirmed to Buzz Feed that its “following tab” is going away. The following tab is the activity feed that displays what posts your friends are liking, commenting on, and following. The company actually started removing the tab for some of its users back in August, and is now set to discontinue the tab across all accounts this week.