Twitter is facing a boycott from high-profile users of its platform over its alleged inaction to address anti-Semitic speech, the BBC reports.

A group of British celebrities have gone silent on their Twitter accounts for 48 hours to protest.

It all started when UK rapper Wiley tweeted content on Friday referring to conspiracies about Jews.

Twitter has removed the offensive comments and suspended Wiley’s account. But the damage already reached around 500,000 of his followers.

We’re in, are you? Retweet if you are.

Join us, anti-racism campaigners and other public figures on a mass walkout from Twitter for 48 hours starting tomorrow at 9:00am.#NoSafeSpaceForJewHate pic.twitter.com/SM9Y1wg8C6

The British government shared its concern as well.

The movement was on the heels of the Christchurch massacre. A local terrorist attacked two mosques and killed or injured over 100 people. He streamed his acts on Facebook Live.

Facebook is under pressure recently to address hate speech due to posts by US President Donald Trump.

Facebook CEO Mark Zuckerberg announced last month that the platform would review its policies to address the angst. So far, its steps have been limited. 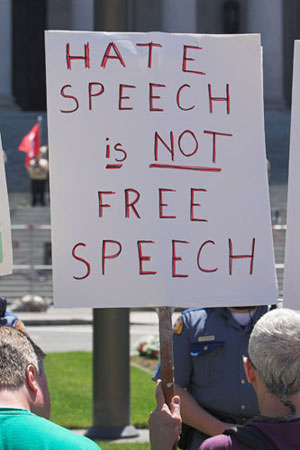 Social media platforms walk a thin line. They want more engagement. But their users rely more on them for news and information. They now have a duty to control shared content to limit its harm.

Who decides what is harmful or not?

Trump has accused social networks of conservative bias. But most evidence suggest that social networks have worked hard for inclusion and diversity. They also limit direct threats and hate speech whenever they can.

Governments have more regulations in place for social media platforms to ensure they respond to incidents faster. But how fast is faster?

For instance, Twitter should remove hate comments within 30 minutes. Yet, it depends on the reporting system, the staff available, the approval systems and other variables.

Some offensive remarks will slip through, even with the best detection systems in place.