Perhaps what hacker group Anonymous has failed to see with their popularization of the Guy Fawkes mask is that they are indirectly helping Time Warner, one of the largest media and entertainment companies in the world, a report from The New York Times suggests. 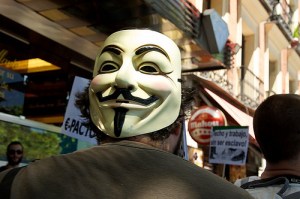 Guy Fawkes, the British man who tried to blow up the Parliament in the 17th century, is central to the narrative of the said movie.

The Guy Fawkes mask is worn by title character V in the movie “V for Vendetta”, produced by Warner Brothers, throughout the entirety of the film symbolizing anonymity and going against an Orwellian “Big Brother” authority.

Because of the symbolism, people supporting the Anonymous hacker group have always worn Guy Fawkes masks during protests and Anonymous itself uses the mask as a symbol in its videos, releases and graphic images.

However, what few realize, the Times says, is that Time Warner earns royalties with every Guy Fawkes mask sold.

“Indeed, with the help of Anonymous, the mask has become one of the most popular disguises and — in a small way — has added to the $28 billion in revenue Time Warner accumulated last year,” the Times writes.