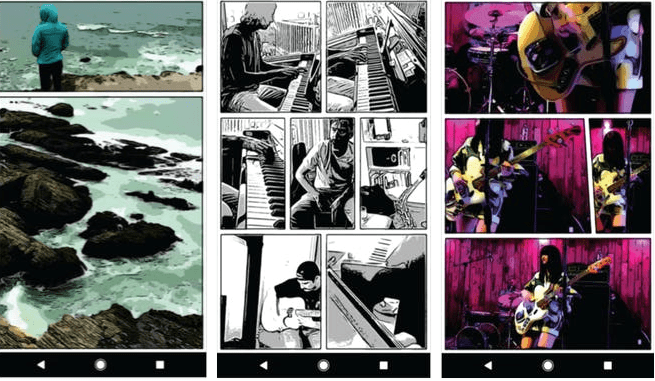 “Storyboard, takes video clips and automatically pulls out six frames which it lays out in a comic book-style template. You’ll be able to refresh the app to get new layouts and frames, with Google claiming that there are over 1.6 trillion combinations,” a short text on the Product Hunt website states.

Everything about the app is still sketchy at the moment, but Storyboard will create some interesting comics out of your short videos. Simply load your video into the app, wait a couple of seconds, and Google will present you with a comic strip with conventionalized effects. According to TNW, you can pull down to refresh the Storyboard with different set of styles. For now, you are not able to manually edit the layout or the panels.

Storyboard is one of three apps being tested at the moment; the other two are Selfissmo and Scrubbies. All three experimental apps are exclusive to Android phones—at least for now.

Selfissmo just as it sounds, is a selfie app that uses experimental research technology from Google to capture photos automatically every time you pose. What the app does is to encourage you to capture your best self.

Scrubbies, the third app being experimented on by Google, it lets you easily manipulate the speed and direction of video playback to produce exciting video loops that “highlight actions, capture funny faces, and replay moments.”

In other Google news, the company’s popular Maps app has just landed an update that will give you real-time alerts during your trips. Google Maps will soon start telling you when to get off a train or bus during your journeys. The notifications will be interactive and will keep you up to date when out on a journey.

While on a transit journey, Google Maps’ new update will appear in the app and on the lock screen of your Android device. The new addition can be found when you do the usual search for your transit directions in the app. You will soon be able to tap a “start” button at the bottom of the screen with the details about your transit journey. This will enable you to get live updates as you ride in your local trains on buses.

The most interesting part of this update is that Google Maps will alert you when you are getting close to your bus stop. Just the perfect feature for a traveler that knows little or nothing about his destination. A perfect tool for individuals who sometimes sleep off during a long journey.

The update is an indication that Google Maps is becoming interactive, especially with the addition of a lock screen notification.