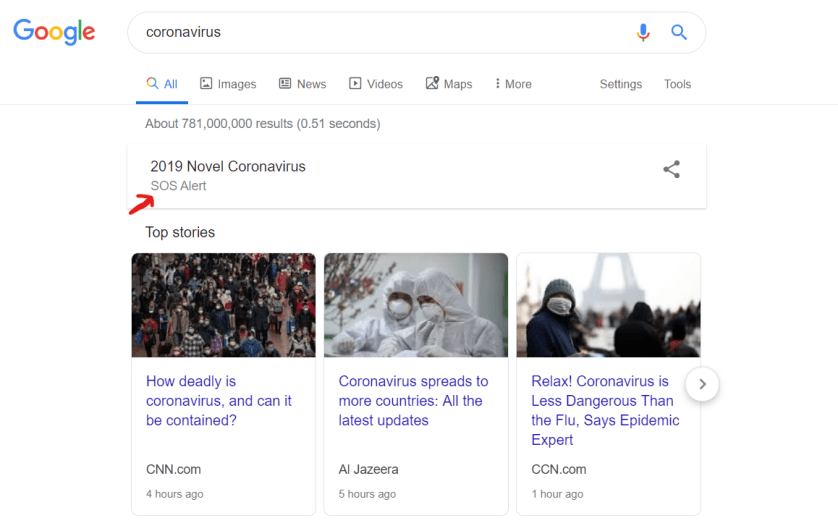 Google is working in conjunction with the World Health Organization WHO to make resources available for people about the coronavirus. The search engine giant in a tweet, said when people search for related info on Google, they will find the alert at the top of the results page. This will also come with direct access safety tips, info, resources, and Twitter updates from the WHO.

Google in the same tweet, announced that it had issued a $250,000 direct grant to the Chinese Red Cross. The company has also launched an internal campaign where its users will be able to send in their donations.

The coronavirus, which has already claimed more than 170 deaths as at the time of writing this, has been declared a global public health emergency.

On Wednesday, Twitter took a new step to put a stop to disinformation about the outbreak of the coronavirus in China. The social media giant in a tweet said it wants to help users access “credible information” about public health its platform.

Twitter’s latest effort is not different from previous action taken to fight against disinformation about vaccine on its platform. The vaccine effort encourages people to “know the facts,” while equally directing vaccine-related searches to vaccine.org, a Department of Health and Human Services [HHS] site. While this may not completely eradicate the spread of fake news about the virus, it could at least help to sensitize the public.

Earlier in the week, Google announced the temporary closure of its offices in China, Hong Kong and Taiwan. Since the outbreak of the deadly virus in China, tech companies have been making frantic efforts to protect staff and also sensitize members of the public on how to avoid getting infected. Google confirmed this move to The Verge on Wednesday in a move that will affect all its offices in China.

A Google spokesperson said the company plans to keep its offices closed in accordance with the safety measures put in place by the Chinese government. As a result of this, temporary business travel restrictions on flying to mainland China and Hong Kong. Furthermore, the company has advised its employees currently in China as well as those who have families in that country to return home as soon as possible to work from home for a minimum of 14 days from the date of their departure.

Apple and Facebook have both taken similar measures to protect its staff and ensure everyone one of them is safe. On Tuesday, Apple CEO Tim Cook announced his company’s plans on restrictions. The company said it has closed down at least one retail store in China and is measuring the temperature of its employees regularly, while aggressively cleaning office spaces.