Google retreats as it rolls back Android Messages to old design

Google has mysteriously rolled back new updates it introduced a couple of days ago to Android Messages. Just to be perfectly clear about that, the company beat a retreat the same day it rolled out dark mode and material design to the SMS app.

Before the company took that sudden decision, Android Messages was already being upgraded to 3.5 version, with users welcoming a new Material Theme, which also came with a Dark Mode. A lot of us have been looking forward to the update, but were shocked to find out that Google put a sudden stop to that for some unexplained reasons.

It does not really matter if you were quick enough to update your version to 3.5, but regardless of whether you did or not, the Dark Mode and Material Theme have both vanished into thin air—it is no longer there.

Many Reddit users were first among many to spot the odd change made by Google, and were able to post their comments in reaction to the action. While we await any official statement from Google if indeed any will be offered, it is important to state here that it is the company’s prerogative to do that. However, since no bug was reported while many tried their hands on the new update, we expect that the features could be pushed out maybe sooner or later.

Per The Verge, the screenshot below gives a clear picture of what the new design looked like before it was rolled back. I have a feeling that the new design if it ever makes a comeback will be something a lot of users will fall in love with. One only hopes the recall is not a permanent one, and users will soon be able to upgrade their versions to the new Dark Mode and Material Design. 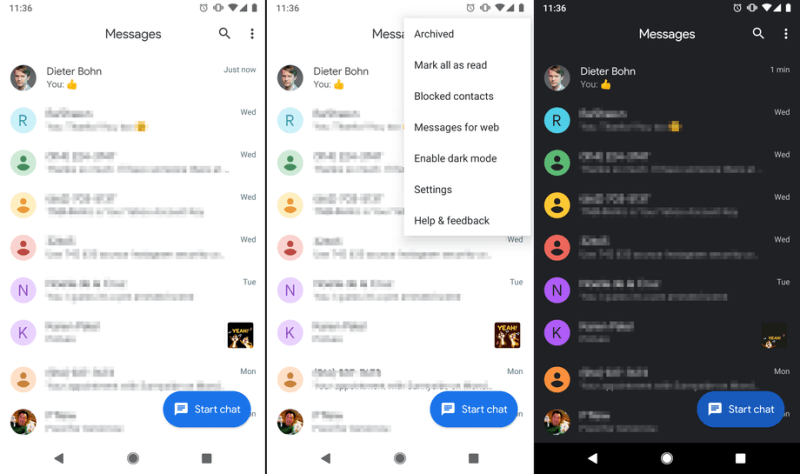 Many apps are embracing dark mode and material designs. Google in particular seems to be the forefront and continues to break new grounds in terms of making its apps more attractive to people.

YouTube, a Google subsidiary introduced the feature to mobile last March. The web version of dark mode was added sometimes last year, and became instantly popular among users and visitors to the website. At the time, many users thought it won’t be long until the mobile version was added, but that was not to be until months later.

Dark Theme is preferred by many users because of its many benefits. For example, viewing YouTube in a room with dim light does not leave any strain on your eye. It is very unlike the usual way of watching YouTube, especially in an apartment where there is no light or the light is dim.

YouTube formally announced Dark Theme in the middle of last year after it quietly added it to its service without raising an eyebrow. Dark Theme, according to the company, is designed to “cut down” on glare and let you take in the true colors of the videos you watch. It [Dark Theme] turns your background dark, and enriches your YouTube experience.