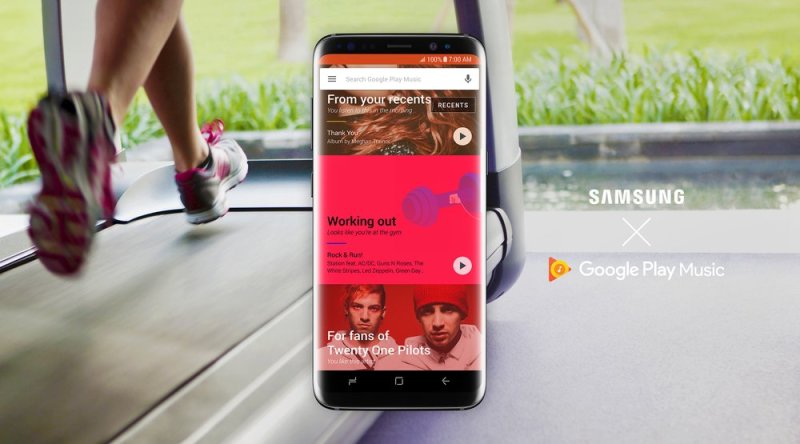 Starting with the new Galaxy S8 and the Galaxy S8+, which by the way will be launched today, Samsung and Google have inked a deal that will allow Google Play Music to become the default music service on Samsung phones.

The deal was announced today by Google, with Google Play Music now having the right to provide the right music for users of Samsung phones. According to the Lead Product Manager for Google Play Music, Elias Roman, the collaboration will also enable Google to “create special feature for Samsung customers.”

There is even greater news coming out from both companies; according to Google, anyone with a new Samsung phone or tablet can upload and stream up to 100,000 of their own songs to Google Play Music for free. Moving your personal music according to Roman is now easier and much fun since there is more storage space offered exclusively to Samsung customers—and that’s not all…

Every new Samsung phone and tablet you buy will now come with a free three-month trial of Google Play Music. Don’t like ads? No problem; Google will also give you an “ad-free and on-demand access to more than 40 million songs and thousands of playlists tailored for any mood or occasion.” Access to YouTube Red [where available, according to Google] will also be available so you can enjoy your favorite videos ad-free.

Bixby, Samsung’s new intelligent interface is also being configured to work along with Google Play Music. You will be able to ask the assistant to play your favorite song or music on Google Play Music, and without hesitation, it will start playing. When Bixby is launched later in the spring, you will have access to use the service same way Apple Siri and Amazon Alexa users have been using theirs.

Give it up to the new look Google Play Music—the music service is spotting an attractive look, and is now focused on contextual recommendations. Google’s approach to most of its services has indeed changed; users are now the core of the company’s services.

The revamped Google Play Music service was recently personalized by Google to suit your music taste. The service is now smarter, easier to use, and now based on the increasingly popular machine learning. Machine learning is now a big part of the revamped service. This will “figure out what music you like and then mixes in signals like location, activity, and the weather along with hand-picked playlists to personalize music for wherever you are and whenever you want tunes, Google’s Elias Roman, Lead Product Manager Play Music said last November.

If it’s about getting the right music to suit a particular mood, the newly revamped app does it better than Spotify at the moment. Of course, Spotify has music for every mood, the problem is, it doesn’t refresh as often as Google Play Music does.