Google is giving people the ability to monitor the progress of Santa Claus as he makes the necessary preparations for his annual Christmas trip.

In a post on Google’s Lat Long Blog, Brian McClendon, VP of Engineering for Google Earth and Maps, said, “Whether you know him as Père Noël, Weihnachtsmann, Babbo Natale, Father Christmas, Saint Nicholas or Santa Claus, there’s a chance you’re anticipating a visit from the jolly old man this December 24. Although he goes by many different names, the magic he brings to the holidays is felt by children and adults celebrating Christmas all over the world.” 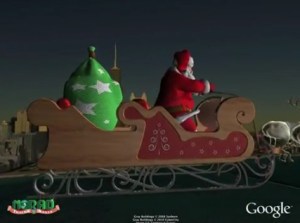 The excitement built up around the upcoming holidays has taken over Google, with McClendon saying, “Like most traditions, this one has evolved over time. Now, in addition to racing downstairs to their stockings, children can follow Santa online on his annual trip from the North Pole to their chimney.”

The countdown to track Santa Claus started on December 1, and Google, tracking Santa via NORAD, is giving kids “holiday games” to have them psyched up with Santa related fun.

Holiday shoppers had better get ready on December 24 as Google presents the culmination, but for now, “follow NORAD Tracks Santa on Google+.”