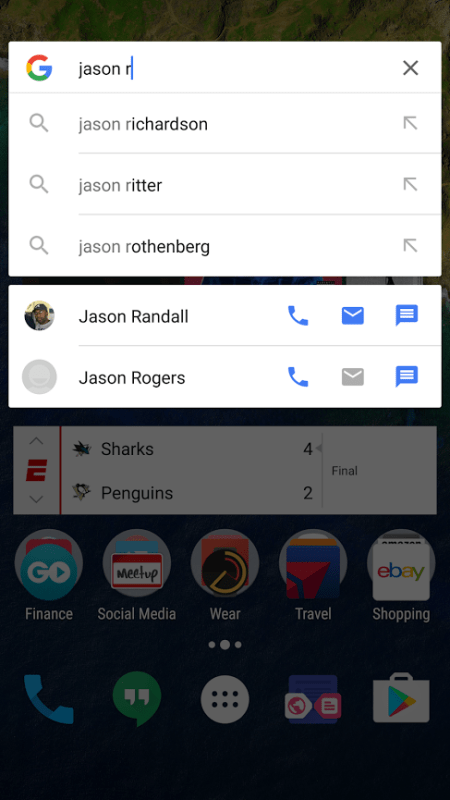 Android user James Scott Jr has noticed some interesting changes to the Google Search app. The new features, according to Scott, will let users call, text or email directly from search results. Now don’t mix things up here as not everyone has seen this feature yet, which means it is probably still being tested by Google.

Let’s just hope that this test being carried out by Google succeeds and eventually launched as it looks like something that a lot of people might like. Being able to text or call or send an email to contacts on the search app sounds like something that might bring a lot of convenience to users.

Currently, the Google Search app on Android are treated in name cards when you search for specific contact. When you click on it, it leads you to the contact page in from the Contacts app, from where you have options to do what you want with the result of the search.

Google is always working on new features or juggling older features to make its products and services more exciting and appealing to users. This is to be expected considering the stiff competition it faces from Apple and Microsoft. The Apple Spotlight Search on iOS is handy when searching online or locally stored data. Being able to do more than just search on Spotlight Search makes this new feature a timely one for Google—it is inevitable if you ask me.

On Monday, Microsoft gave an indication of what it has in store when it announced plans to acquire LinkedIn. This puts Google under the spotlight and makes analysts wonder if the tech giant should not be looking at acquiring a major social network site of its own—like Twitter for instance.

LinkedIn has a social dataset of 400 million users, which gives Microsoft a kind of lift in terms of sales pitch for its software. Google should worry because Microsoft’s acquisition has the potential of repositioning itself to compete in a market largely being dominated by the former.

Microsoft did announce that LinkedIn will assist it with its Cortana, which is the company’s AI’s powered assistant. Of course, Google has its own artificial intelligence, but what it doesn’t have is LinkedIn’s data, which could give Microsoft a major in the market. Perhaps, the time to act is now, and while this new feature being tested by Google Search app might not be the big push it needs to stay ahead—it is no doubt a commendable one.

Definitely less clicks or taps to make now, and it’s all thanks to this new feature. Having to do some of the things you do on your phone in a single app without having to tap in and out does make things easy and convenient. As expected, a few responses on Scott’s contact showed that it is one feature that a lot of people would love to have once it is available.