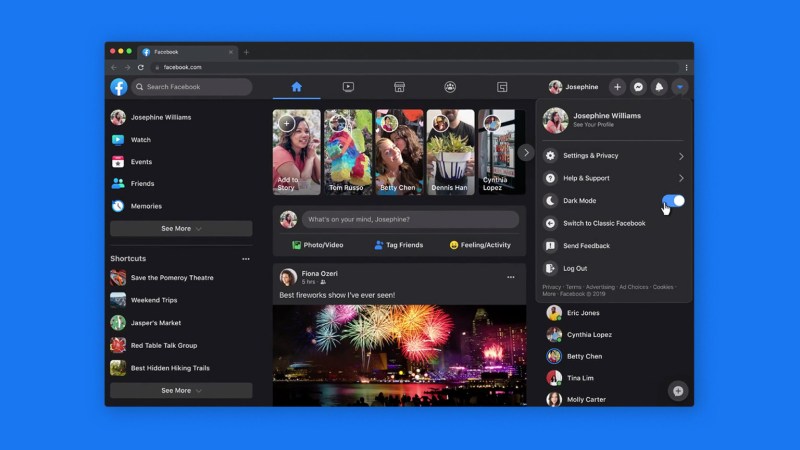 Facebook’s new design with dark mode has finally rolled out to every user. The social media giant announced the new look interface today in a blog post, which looks really different from what it has been in the last 16 years. In the post, Facebook said the new design makes it easier to find features such as Games, Videos and Groups. The new look desktop site shares a lot of similarities with the mobile version of the service, and is expected to load faster than what you have been experiencing in the past.

For the dark mode gang; finally, you can turn off the “light” and use the Facebook desktop version without the strain it causes your eyes. Unlike Twitter and Instagram, Facebook’s adoption and subsequent rollout of the dark mode is coming a bit late; but I am sure users would not complain much considering the fact that its own version looks clean and cool.

The new design now makes it easier to create Events, Pages, ads and Groups. Starting a new Group is now easier because the new look allows you to preview it in real time, and have a view of how it would look like on mobile devices when it finally goes live.

While the dark mode is something that would not take time to get used to, the same cannot be said for the entire redesign itself—it would take some time to get used to. I have been using the new design for a while now [lucky to be among those that had access to it when it was first announced weeks back]; but mow I am getting used to it.

The new desktop redesign now offers streamlined navigation through tabs for Groups, Marketplace, Watch and more sitting at the top of the homescreen. The load time of the home page is now faster and does not take as much time as the old Facebook. As a matter of fact, it is now easier to find your way around the site with larger fonts and much improved layouts.

To activate the new dark mode on Facebook desktop, simply go to the Settings Menu   -> “See New Facebook.” To disable it, users can return and hit “Switch to Classic Facebook.”

In March, Facebook tweaked a couple of things and Messenger is a lot better—at least from afar. The Messenger app has come a long way since it was first introduced way back in 2011. From being just an app where you could only chat with your contacts by way of texts, you can now make video and audio calls, express yourself with amazing GIFs and many more. Ironically, all features added along the line contributed to some of the major issues the app has—navigation for example.