Over the next couple of weeks, Facebook will be rolling out Facebook Recognition privacy setting. What that means is that facial recognition will no longer be available by default—and as a matter of fact, it will henceforth be opt-in for everyone. The announcement was made today by the social media giant.

If you have Face Recognition turned on, you will be notified by Facebook when someone uploads a photo of you. This will also work even if you are not tagged by a friend; but you will still be able to tag yourself, or report the photo if you want it taken down.

“Starting today, people who newly join Facebook or who previously had the tag suggestions setting will have the face recognition setting and will receive information about how it works. The tag suggestions setting, which only controls whether we can suggest that your friends tag you in photos or videos using face recognition will no longer be available.” Srinivas Narayanan, Applied Research Lead at Facebook AI wrote in a blog post.

The roll out is imminent as Facebook said users who still use the tag suggestions setting will start seeing a notice in their News Feed from today. Notification to users will include information about the new feature, options to find out more about how Facebook users face recognition, and a button to turn it on or off—it is your call going forward according to the social media giant. 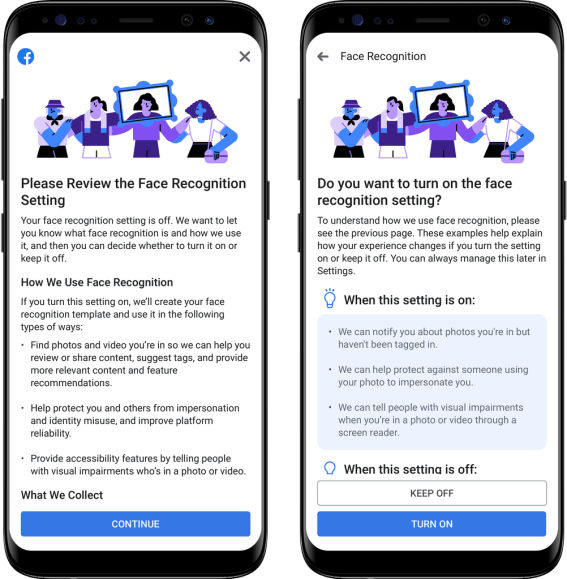 For those who do not have face recognition setting and chose to leave things the way they are, Facebook says it will not use the feature to recognize them or suggest tags. In addition, according to the company, features like Photo Review that lets you know when you appear in photos even when you are not tagged will not be activated. However, bear in mind that you can only view such photos in post based on the privacy setting. While people will still be able to manually tag their friends, Facebook will not suggest you to be tagged if you do not have face recognition turned on. Notification will, however, not be sent for those who have the face recognition setting.

Reports have emerged that Facebook is working on a feature that will allow you to hide likes in posts—just like Instagram. Though, the ability to hide like counts on posts is still being tested, it seems the feature has come to stay—and we could be counting down to a formal or global roll out.

The unreleased feature, according to reliable tipster Jane Manchun Wong is still being tested, and hides the like/reaction count from anyone other than the creator of the post. Recall this is exactly how Instagram’s unreleased version works. Jane adds that the list of those who liked/reacted will still be accessible, while their exact number will not be displayed.