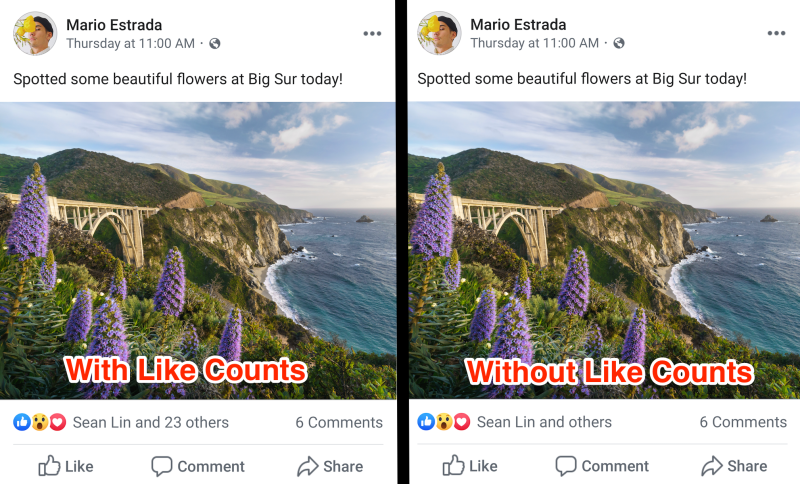 Reliable reverse engineer and tipster Jane Manchun Wong had a couple of weeks ago tweeted that Facebook was working on the ability for users to hide likes count. This has not only been confirmed by the social media behemoth, a test is actually being carried out by users in Australia. A successful period of tests as you already know, could lead to wider roll out which could be sometimes in the very near future.

Jane had while tweeting the information, posted a screenshot of what the feature would look like—and there is no doubt that Facebook is following on the heels of Instagram. Instagram as you may have read or heard before now, is already hiding likes count in Ireland, Japan, New Zealand, Italy, Brazil, Australia and Canada.

Users in the aforementioned countries have access to the test, and will be able to hide likes in their posts by default. On Instagram, the feature would appear on the posts of users in those countries by default, but they would be able to opt out to show the likes publicly.

Starting today, according to TechCrunch, users in Australia will be able to hide likes count in the posts. While the author of the post will have access to see the number of likes, his followers would not be able to view them.

“We are running a limited test where like, reaction, and video view counts are made private across Facebook” a Facebook spokesperson said per TechCrunch. “We will gather feedback to understand whether this change will improve people’s experiences.”

There is a chance that this small test currently being carried out in Australia could be upgraded to a global or wider roll out should the feature improve people’s sense of well-being. The focus here, according to Facebook is so that people can improve on the quality of what is being shared and how it connects with the people they care about.

Once again, the target here is the overall mental and overall wellbeing of people who use Facebook. It has been said severally that the number of likes generated per posts could have some effect on the mental health of people. This, some people have said could lead to depression—and Instagram and Facebook might just be adding one of the most useful features in recent years.

Instagram in a statement per the BBC said the hide like counts is being added to take away the “pressure” users have on the number of likes they hope to receive on a post. “We hope this test will remove the pressure of how many likes a post will receive, so you can focus on sharing the things you love,” Mia Garlick, Facebook Australia and New Zealand director of policy said in a statement.