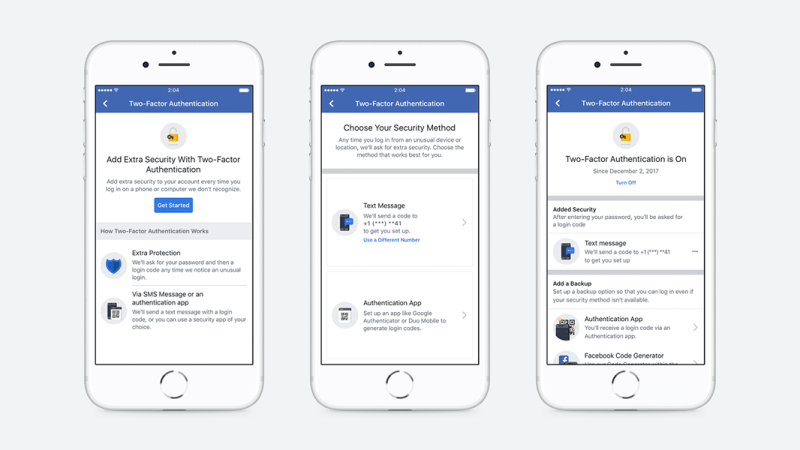 Facebook has announced an important update to its two-factor authentication, making it easier in the process. Going forward, it is no longer mandatory to register a phone number to activate the process. However, and in addition to the phone number option, you can choose apps like Duo Security and Google Authenticator.

Facebook has now simplified the entire setup process, and you can now enjoy a more guided experience when setting up the two-factor authentication for your account.

We previously required a phone number in order to set up two-factor authentication, to help prevent account lock-outs. Now that we have redesigned the feature to make the process easier to use third-party authentication apps like Google Authenticator and Duo Security on both desktop and mobile, we are no longer making the phone number mandatory, Scott Dickens product manager at Facebook wrote in a blog post.

Two-factor authentication provides an extra layer of security for all Facebook users, and is what is obtainable in the industry at the moment. However, adding apps like the aforementioned ones could strengthen the existing arrangement and make accounts more secure.

The process really doesn’t take much of your time, but trust me, it will save you a lot of pains later.

Still on Facebook and security, the social media behemoth recently suspended 200 problematic apps for misusing data. Recall that Facebook had promised to conduct a full-scale investigation into the recent Cambridge Analytical data scandal. The scandal you would recall sept through the internet like a tornado; but Facebook had since been making some sweeping changes.

The company through its VP of product partnerships, Ime Archibong announced that the suspension of the apps was in keeping with the promise it made to investigate all the apps that had access to the network pre-2014 before it changed its policies. Facebook founder Mark Zuckerberg had promised that his company would audit individual apps and would not hesitate to ban any app that failed an audit.

To date thousands of apps have been investigated and around 200 have been suspended — pending a thorough investigation into whether they did in fact misuse any data. Where we find evidence that these or other apps did misuse data, we will ban them and notify people via this website. It will show people if they or their friends installed an app that misused data before 2015 — just as we did for Cambridge Analytica, Archibong said.

Judging by the aforementioned statement, Facebook will continue to carry out more audits to ascertain the number of apps that have “misused people’s Facebook data.”