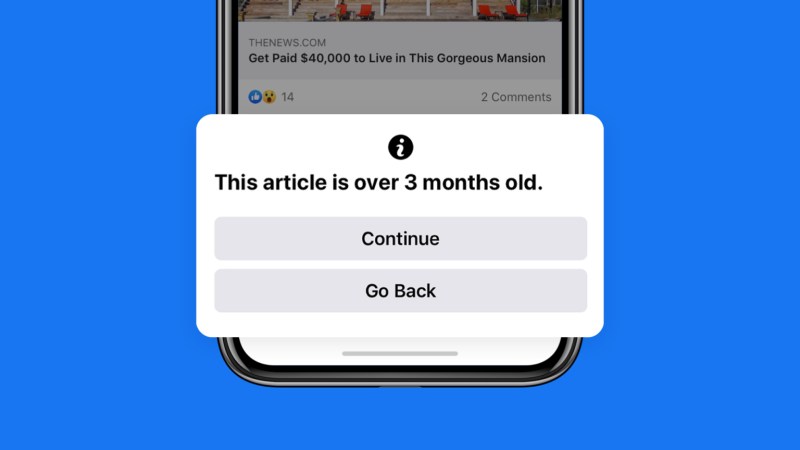 Facebook has updated the process of sharing articles on its platform—the social media behemoth will henceforth display a warning sign when sharing an article that is more than three months old. The new screen was announced in a blog post on Friday, and is designed to give you more context about articles before sharing them. This, Facebook hopes will make the content on its platform more “timely and credible.” The notification will only act as a warning, and not a restriction, which means you can still go ahead to share the content.

This feature becomes necessary considering how concerns are being raised over how old articles are sometimes shared as if they are new. “Over the past several months, our internal research found that the timeliness of an article is an important piece of context that helps people decide what to read, trust and share. News publishers in particular have expressed concerns about older stories being shared on social media as current news, which can misconstrue the state of current events,” said John Hegeman, VP Feed and Stories.

So, when next you click the share button on articles older than 90 days, Facebook will display a new screen warning that you are about to share an old article. The decision to go ahead is however, up to you—you will be allowed to decide if the article is still relevant.

Still on content, Facebook has removed a video posted by President Trump on his Page. The video, which has a black toddler running away from a white toddler is different from the original one which saw both children hugging each other. The original video was posted in 2019, and is a complete opposite of the one posted by Trump, which has now been removed for copyright violation.

One of the parents of the girls in the video filed a copyright complaint, which prompted the social media giant to remove the video from its platform. At the time of removal, the video had amassed more than 4 million views on Facebook.