Facebook Rolls Out Discover People To Connect With Random People 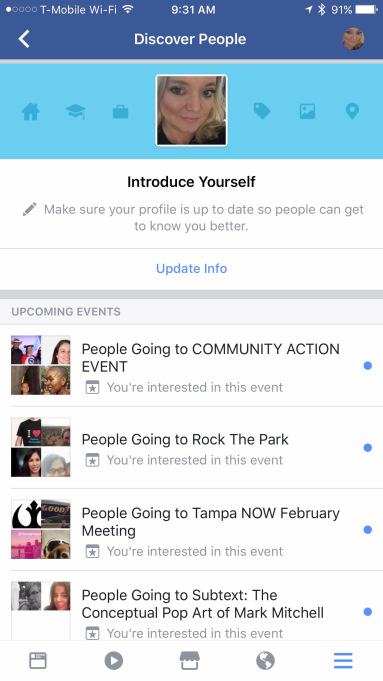 With this new feature, it’s obvious that Facebook wants you to start connecting with random people online. Discover People, the latest tool, will allow you to make friends with other users in this social network.

It works the same way as the contact and profile suggestions of LinkedIn and Twitter. In this latest feature, the social networking site will recommend some people that you might have something in common with. It could match you with other users based on the college or university you graduated from or Facebook groups that you belong to.

The Discover People is found in the more menu navigation tab if you’re using the mobile app. If you don’t see it yet, you will, soon, as the company gradually rolls it out to iOS and Android users.

Once you click the feature, you’ll see a message asking to introduce yourself. In that way, people will get to know you better. Try clicking on your profile photo, and you’ll be shown with another screen. In here, you can add a short biography. You can add featured photos by swiping to your left.

Go back to the start screen to see friend suggestions. If you scroll it down, you will find the groups that you are a member of. There’s a separate section with a title of “Discover People.” Tap it, and the social networking site will give you a series of user profiles that you can connect with.

This feature is also similar to the feature in a dating app, like the Tinder. But it seems the company wants to help you meet other users based on your interests and location. And the rest is up to you, should you connect with them or not.

People You May Know

Discover People can be an extension of “People You May Know” feature for desktop. But it came under fire when a user reported that it used location data to make a suggestion. But Facebook denied that it uses device location. Rather, it only uses the location information that you use on your profile.

This new feature can be creepy for some as it would make them feel like a stalker. However, the company insisted that it’s not using your location data when it suggests people. Rather, it uses the city you stated in your profile. Now, if your location is set to private, you can still find people using the tool. But other people won’t find you based on the current city that you live in as stated on your profile.

If this new feature would be successful, it signals a massive shift in how people use this social networking site. It might play a role in shaping connections. And it will drive growth in interactions and encourage more sharing on the platform.

People Discover could be a useful tool if you love professional networking. Or it could also be used for online dating.

Are you excited for this new feature? Or would you rather want to connect with people that you already know?