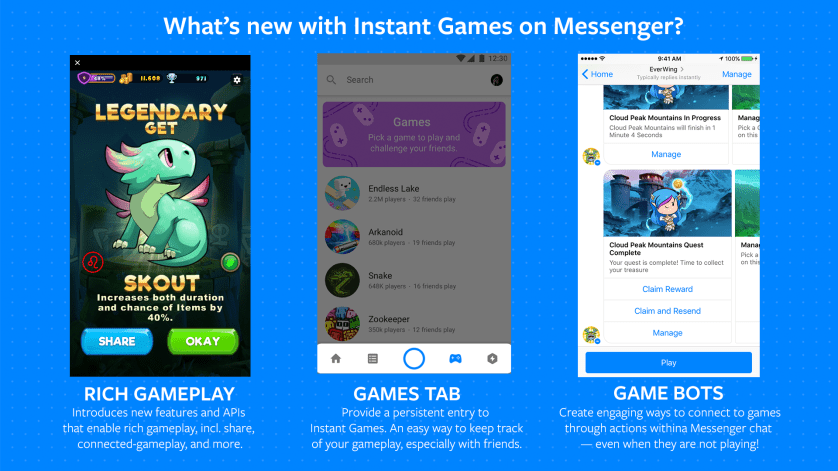 Facebook wants to prevent its users from going to app stores. For that reason, it enables them to play Instant Games within its Facebook Messenger. The feature is a no-download thought that uses HTML5.

It was first introduced last year. However, only a few countries have accessed it. Now, the company made sure that its users worldwide could access this feature. Currently, users could choose from 50 titles. The two most popular ones are Pac-Man and the 8-Ball Pool.

In addition to Instant Games, the social networking site also revealed during its F8 conference that it’s going to introduce new elements. It’s been announced that game developers can create game bots. These bots could communicate with users and tell them about new rewards and levels. You’re familiar with them if you play EverWing.

What are rich gameplay features?

“At F8, we introduced rich gameplay features to give developers more control of the gaming experiences they create. Developers can customize their own start and end screens and integrate new APIs that can help drive share & connected gameplay. Rich gameplay features are laying the groundwork to support a wider variety of games that extend beyond the light-weight, score-based games currently offered on the platform.”

“Rich gameplay features such as turn-based games (our most requested feature) can also weave in leaderboards and tournaments, and offer more visually engaging and customizable game messages during play. Game bots help re-engage players by calling out new game options and encouraging competition with updates on the leaderboards.”

One of the first games to join is Words With Friends by Zynga. You can play it as a turn-based game and with rich gameplay feature.

How about in-game purchases?

Currently, you can’t find ads. You can’t even make in-game purchases. In other words, the company and its developers aren’t making money on this platform yet. But considering Facebook’s ability to monetize its features, ads and in-game purchases would come soon.

One of the games to look forward to is the Endless Lake. You may also find Space Invaders and Wordalot interesting. If you’re interested in basketball and bingo, there are also games focused on these themes.

The original apps of Facebook were sluggish. However, as developers are more skilled in HTML5, they could now provide explosive graphics without having to require users to download an app.

In addition to Facebook Messenger, the company also introduced a desktop gaming platform. It’s called Gameroom that has a look and feel of Steam.

Online gaming has never attracted an average person who’s always on the go. That’s probably because he doesn’t want to go to an app store to download a game or doesn’t like downloading anything that can take up a lot of space.

These issues can now be resolved through Instant Games as users don’t have to leave Facebook Messenger to play games.