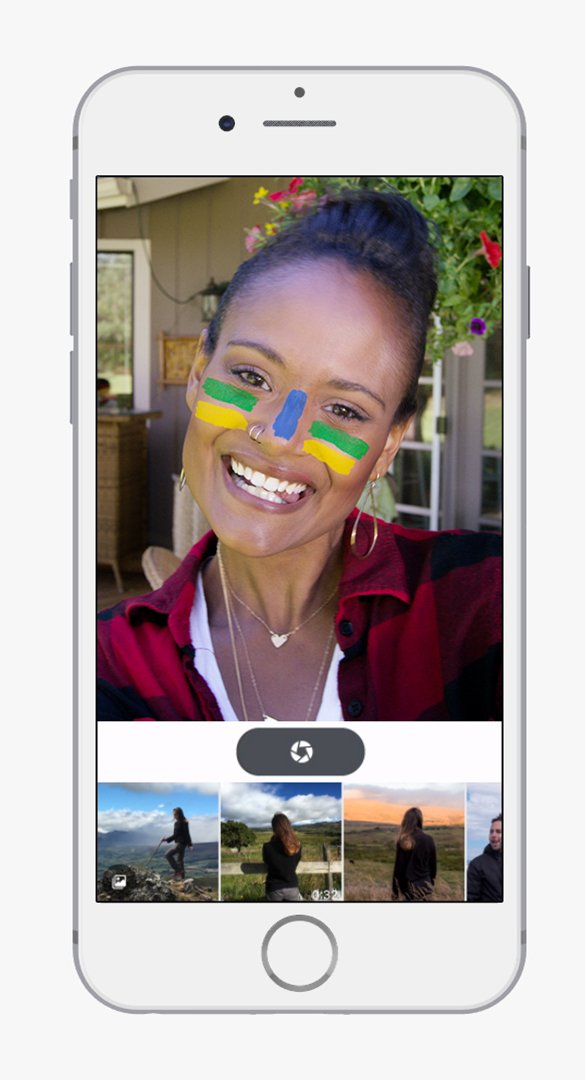 First, it was Instagram (a Facebook-owned app) that copied Snapchat’s Stories feature. Since the copyright laws do not cover ideas, Facebook is ready to “imitate” another Snapchat’s feature. Clearly, Mark Zuckerberg’s main app does not have a problem copying Evan Spiegel’s social media app.

Facebook is currently testing another feature on its app that allows users to see a prompt when they open their smartphone’s camera and capture a photo of themselves. This feature is being tested in Canada and Brazil.

People who are lucky enough to try it out first can add Olympics-themed face filters. From there, they can share them to their profile.

The app wants to encourage people to utilize cameras and post selfies.

According to Sachin Monga, who is Facebook’s product manager, Snapchat has done an excellent job in building a modern composer.

“The thing that’s created the change from text to visual sharing is that everyone has a phone and a camera in their pocket, but they’ve definitely done a really good job with it.”

The new feature is still experimental. That means, it may or may not be available outside of Canada and Brazil. It will be added to Facebook’s app for Android and iPhone.

The latest update is the first time that the company incorporates selfie filters from MSQRD, which was purchased by Facebook in March.

Facebook tried to acquire Snapchat for $3 billion in 2013. To date, the Stories feature of Instagram is the app’s proof that it wants to copy Snapchat. Unfortunately, Snapchat’s spokesperson declined to comment.

As mentioned earlier, this will be the first time that Facebook is incorporating MSQRD filters to its own app. Facebook is using face recognition technology to assist users in applying the filters on their faces.

The said feature seems familiar because Snapchat is already providing an array of those filters.

What Facebook is trying to do here is to be a wider version of Snapchat. The new filters will be about the Olympics. The selected users can try several filters, such a face-paint, and geo-filters. Although this new feature is almost similar to Snapchat’s, the filters are quite different from Snapchat’s.

The number of users who are sharing their photos have dropped. This new feature may help encourage more users to share their photos. If Facebook could match the functionalities of Snapchat, then it might have to potential to beat it.

Why is it okay to “copy” Snapchat’s features?

Legally speaking, there is nothing wrong with copying those features because copyright laws do not protect an adoption of a feature as long as the expression of it is different. Snapchat may patent its ephemeral message galleries, but the concept can’t be patented.

“The reason Instagram has been so brazen about their blatant copying is probably due to the general principle in IP law called the ‘idea-expression dichotomy’. In short, this means that an idea – such as functionality provided on an app or website – isn’t generally protectable. It is only the expression of that idea that can be protected.”

The real problem here is that the copyright law has not been updated to catch up to the drawbacks of technology innovation.

What do you think of this story? Please let us know your thoughts in the comments below.