Home » Facebook Dating to be added to your profile tab?

Facebook Dating to be added to your profile tab? Soon-to-be launched Facebook Dating could be accessible through your profile tab—and that is per reliable Jane Manchun Wong. Wong, who all the while has been consistent in bringing us latest news on various Facebook products via her Twitter page, said users can access Facebook Dating through the profile tab as soon as it is launched.

Wong supported her claim with the screenshot below, which all but confirmed the fact that you can access the soon-to-be launched dating service/feature right from your Facebook profile tab. 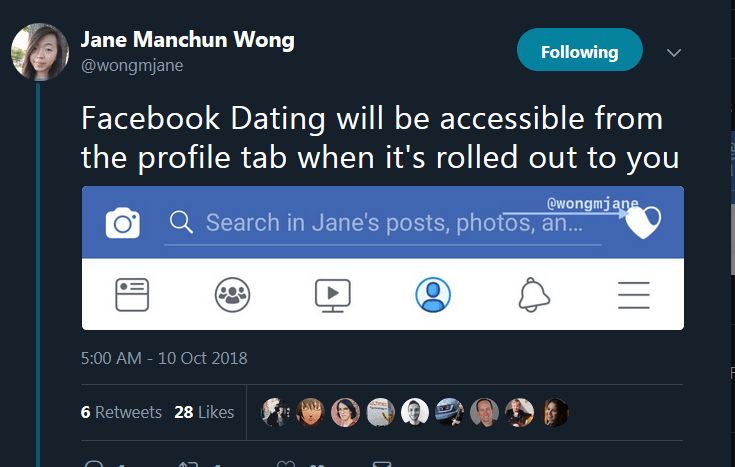 This will probably serve as a major boost for the service as anything short of that could affect its smooth taking off. As you already know, Facebook is battling with loads of privacy issues these days, and anything short of a good start for Facebook Dating could hamper its growth and popularity.

Yet, privacy remains a major concern for millions of people out there, and the social media behemoth has a lot of work to do if it wants to win the hearts of users.

Facebook Dating is only a couple of tests away from being launched on a global scale. Just last month, the social media giant began testing the service in Colombia, which is the clearest indication yet that a global roll out is around the corner.

Wong had in September said Facebook Dating will “show suggested matches from Dating Groups.” This is one thing you are probably familiar with as a Facebook user. Facebook usually suggest who to follow or request users to “suggest” friends to a new user on the platform.

Since Facebook Dating is only about dating, it will probably help to populate the service when it eventually rolls out, especially when it appears to look like you are struggling to find a match all by yourself.

In August, Wong had posted an update on her Twitter page that Facebook was already testing Facebook Dating with members of staff. According to her, employees of the social media behemoth has started testing the app, which could see Facebook take on Tinder.

All data used by employees during the test will be deleted by Facebook before the global roll out. That said, the social media giant has asked its employees to consider using fake data when adding their dating profiles. “Dogfooding this product is completely voluntary and has no impact on your employment.”

Matchmaking will be done by a bunch of preferences—and you can trust Facebook when it comes to matching you with your preference, especially with the incredible amount of data it has. The test has not kicked off yet, but expect that to happen before the end of the year.