Social networking website Facebook, which has seen an increasing number of complaints about its privacy policy and the way it handles user data even as it becomes more popular, this week announced it has made further changes to its terms of use document.

The document, which Facebook refers to as “Statement of Rights and Responsibilities” (SRR), is open for comment to the public until April 27th 2012 at 5 p.m. PDT. Facebook last month announced it was going to make changes to its SRR, gave users a week to make comments, and has since reviewed and considered thousands of them.

In a post to its Facebook governance blog, Facebook explained why it is making the changes to its SRR and told users, who have become increasingly vocal, and aware of privacy issues on the website that “unlike other Internet companies, we propose updates to our SRR and give our users an opportunity to comment before they go into effect.”

Facebook’s post on its proposed changes to the SRR, which is more than 2,000 words long and addresses changes to Section 2, Section 3, Section 5, Section 8, Section 13, Section 14, Section 17 concludes: “We hope you find these responses helpful, and hope that we have addressed your concerns in the responses and in our revisions. Your trust is extremely important to us. Remember that, as always, you can receive notice of any future changes to our SRR by liking our Site Governance page.” 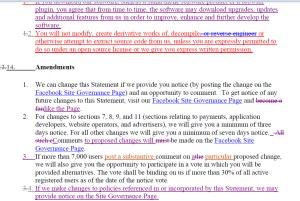 Facebook explains in careful detail in the general section of today’s post that it changed the name of its “Privacy Policy” to “Data Use Policy” in September 2011 so that it would be more descriptive and consistent, and one of the changes to the SRR is that the term “Privacy Policy” is replaced throughout the document with the term “Data Use Policy”. Facebook also helpfully invites us, if we wish, to review its Data Policy here. Before you do that, perhaps you would like to read an article I posted here earlier this month on what Facebook apps do with your data, and your friends’ data.

Facebook also explains in its “General” section of today’s blog post that journalists had misunderstood and misinterpreted last month when it announced proposed changes to the SRR, reporting that Facebook was planning to make changes to its “Data Use Policy” (formally known as “Privacy Policy”) but in fact it is not doing so, rather: “we proposed some mostly administrative and clarifying changes (e.g. “profile” to “timeline” to the SRR.

ZDNet contributor Emil Protalinski, who, like most of us, said he hasn’t yet had time to review the entire 9 page pdf document on changes to the SRR, but did note that the controversial provision remains, which requires users to agree that Facebook owns the trademark for the word “Book” along with 72 other words or phrases:

Here is the relevant text from the new agreement:

“You will not use our copyrights or trademarks (including Facebook, the Facebook and F Logos, FB, Facebook, Face, Poke, Book, and Wall), or any confusing similar marks, except as expressly permitted by our Brand Usage Guidelines, or with our prior permission.”

Facebook has a total of 73 active trademarks listed with the U.S. Trade and Patent Office.

Please take a deep breath, count to ten, and join me now in logging onto Facebook, and typing the word “Book” two or three times in your status update, just for fun.