Facebook begins gradual roll out of dark mode for iOS 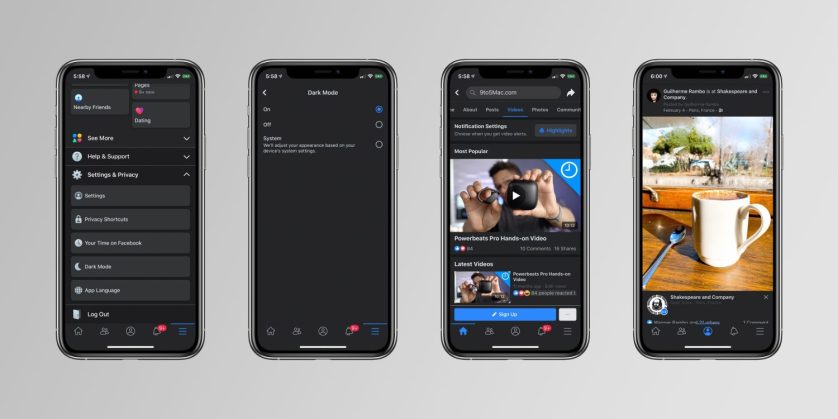 Facebook has gradually started rolling out Dark Mode for iPhone and iPad. 9to5Mac reports that a handful of users have already started noticing the feature in a newly added setting in the Facebook app—with the social media giant also confirming this to be true.

Reports of Dark Mode support have been in the news for sometimes now; and the long wait appears to be over now. Though, the feature was not made available to the public, some users were however, able to access it through some minor tweaking.

Unlike what we have in Instagram and Messenger, the Dark Mode on Facebook mobile will not be completely black. Per 9to5Mac, users will instead see a grayscale design accompanied with accents for logos and icons.

For those who may wish to disable the feature on their device, this will be possible through the in-app settings pane. Support, however, will be available when it comes to adjusting the appearance based on your iOS preferences. In essence, the app will automatically change its appearance to reflect your Dark Mode scheduling.

Facebook appears to be rolling out Dark Mode… https://t.co/qSfDa8d51e

On desktop, Facebook’s new design with dark mode rolled out to every user. The social media giant announced the new look interface in a blog post, which looks really different from what it has been in the last 16 years. In the post, Facebook said the new design makes it easier to find features such as Games, Videos and Groups. The new look desktop site shares a lot of similarities with the mobile version of the service, and is expected to load faster than what you have been experiencing in the past.

Unlike Twitter and Instagram, Facebook’s adoption and subsequent rollout of the dark mode is coming a bit late; but I am sure users would not complain much considering the fact that its own version looks clean and cool.

The new design now makes it easier to create Events, Pages, ads and Groups. Starting a new Group is now easier because the new look allows you to preview it in real time, and have a view of how it would look like on mobile devices when it finally goes live.

While the dark mode is something that would not take time to get used to, the same cannot be said for the entire redesign itself—it would take some time to get used to. I have been using the new design for a while now [lucky to be among those that had access to it when it was first announced weeks back]; but mow I am getting used to it.