The official Twitter accounts of Facebook and its Messenger were hijacked, as Twitter confirmed on Friday. According to Twitter’s spokesperson, as soon as the platform was aware of the issue, it locked the accounts and worked with its partners at Facebook in restoring the compromised accounts. 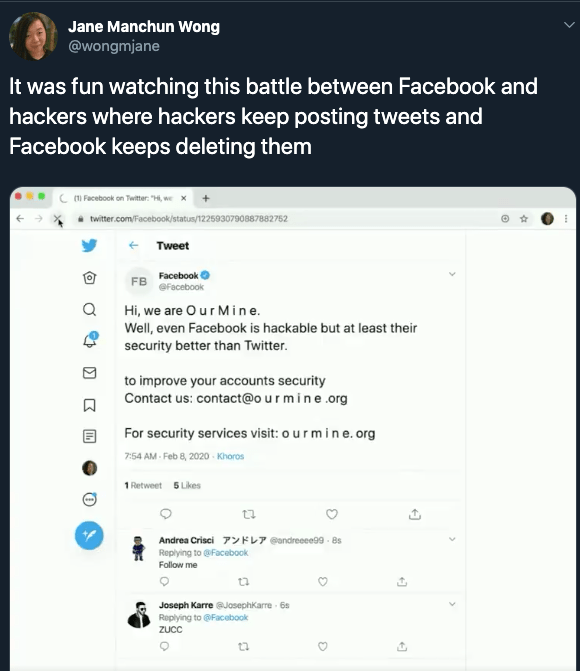 Furthermore, Facebook confirmed that some of its corporate social accounts were also hacked. However, they managed to secure and restore them immediately.

OurMine was the group that took credit for hijacking the accounts. It was also the same group that hacked the NFL and ESPN accounts last week. The compromised accounts returned to normal in less than an hour.

“Hi, we are OurMine. Well, even Facebook is hackable but at least their security better than Twitter.”

The same message was also posted to Facebook’s Messenger account. The hijacker’s tweets were deleted immediately. But the same tweet was re-posted and then deleted.

Twitter said that hackers utilize a third-party platform. After confirming it, they locked the affected accounts.

But according to experts, Facebook’s Twitter accounts were not hacked. Twitter was also not hijacked. Rather, the tweets were sent using Khoros, a third-party platform. It was the same service that sent the hijacked posts from the NFL accounts. This service can also directly publish on Instagram.

The takeovers appeared to last less than 30 minutes. It was brief. However, it caused embarrassment for Facebook.

Specialists stated that the said group used leaked credentials from dark sources. But they utilized password resets to change the account passwords.

This group is a prolific hacking group. It is based in Dubai and, as mentioned earlier, it was the same group that hacked Twitter accounts of San Francisco 49ers, Kansas City Chiefs and other NFL teams.

The group considered themselves as security consultants. They always claim that the attacks were their way of drawing attention to the vulnerability in the security of those accounts. However, many people are arguing about the ethics of using those tactics.

It can be difficult to hack high profile accounts. However, Facebook and its Messenger Twitter accounts must be improved.

As regards to third-party platforms in managing social media, they are convenient. However, they can also create a way for cybercriminals to hijack your social media accounts.

For that reason, you might want to consider using robust third-party platforms and get rid of those services that do not provide a multi-factor authenticator app for your protection.

One of the third-party platforms you can try is Hootsuite. It lets you manage your social profiles through a single dashboard. To manage your engagement, it utilizes different streams. You put streams for every social network in monitoring your content.

Sprout Social is also great. It has a single stream inbox that manages messages in one place. You may also opt for Buffer that offers affordable pricing for its basic services. (But it has terrible customer support.)

With the recent hijacking of Facebook’s and its Messenger’s Twitter accounts, you should consider third-party platforms that utilize robust security technology.