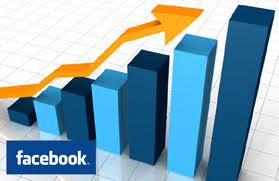 The revenues for Facebook soared to $1.6 billion in the first half of 2011, reports Reuters citing a source with knowledge of Facebook’s finance. Facebook does not disclose its financial results publicly.

According to the source, Facebook revenues were recorded to be about $500 million in the first half. It earned $355 million in net income in the first nine months of 2010 suggest documents of Goldman Sachs.

According to comScore, nearly one-third of all Internet display advertisement impressions in the US in June went to Facebook. This figure is more than the combined figures of Yahoo, Microsoft Corp, Google and AOL Inc. It is still not clear what percentage of the total $1.6 billion revenue came from advertising sales. The company also declined to comment on its financial results.

Facebook was created by Mark Zuckerberg in 2004. The popularity of Facebook is constantly growing among advertisers as well as the users. There are currently about 750 million users of Facebook. It is one of the most visited destinations for people on Internet. Users of the site spend hours on it communicating with friends or sharing photos and videos. It is soon going to introduce new features for the users including the music services. Many experts believe the company would go public in 2012.

“We really see Facebook as becoming like the operating system for delivering ads on the Internet,” said Blinq Media CEO Dave Williams. Blinq Media runs ad campaigns for companies on Facebook. According to William, big as well as small businesses are increasingly spending money for marketing on Facebook, which has ability to target ads to users based on their interests.