Home » Dropbox opens up its file “Transfer” feature to everyone

Dropbox opens up its file “Transfer” feature to everyone 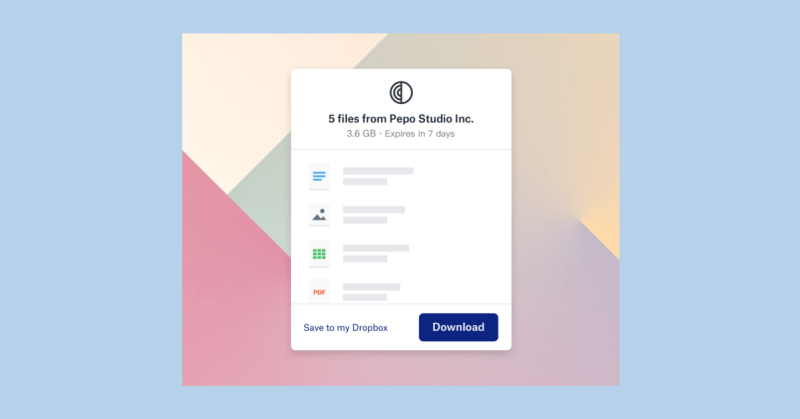 Dropbox has launched or better still, opened up its file “Transfer” feature to every user. File transfer on Dropbox was in beta for a long time before the formal roll out, which is now available globally.

The feature offers you up to 100MB of file transfer, while also providing a link to the landing page that you can then share. People who get the link can then directly download the file from that page or save it to their Dropbox account. The good thing about this feature, which also makes it unique to WeTransfer and other similar product is that it is integrated within Dropbox.

All you have to do is to select files from your hard drive or your Dropbox account to create your transfer. Once you have done this, you will get a link that you can send to anyone—whether they are on Dropbox or not. Once you send it, viewership stats let you see how many times the transfer has been accessed. The good thing is that you can also protect your file with a password and set an expiration date to encourage people to download it.

Dropbox also announced that users of its service on desktop and iOS apps can start a transfer in addition to dropbox.com. Users can also have access to transfers sent by others through its iOS app. You will also get the chance to customize the design with a background and logo that will appear when people view your transfers.

Last June, the cloud file storage company transformed into an enterprise collaboration workplace—what I would call a task manager. It means you can now do more than just storing your file on the platform, and now collaborate with a colleague online.

A new version of Dropbox that allows you to launch apps with shortcuts for G Suite and many more was announced by the company. You will also be able to use built-in Slack message sending and Zoom video calls, search across all your files on your device, communicate, comment on a colleague’s work, and much more. You will also be able to add notes and tag your colleagues at work in to-do lists attached to files in what would virtually make the app a task manager.

The new Dropbox was launched for all of its 13 million business users across 400,000 teams plus its consumer tiers. Users can opt-in here for early access and businesses can turn on early access in their admin panel. “The way we work is broken,” CEO Drew Houston said to cue up the company’s mission statement: “to design a more enlightened way of working.”

The new Dropbox also comes with a deep integration with Slack. This will enable you to comment on files within Dropbox and Zoom, which will in turn allow you to video chat without leaving the workplace.