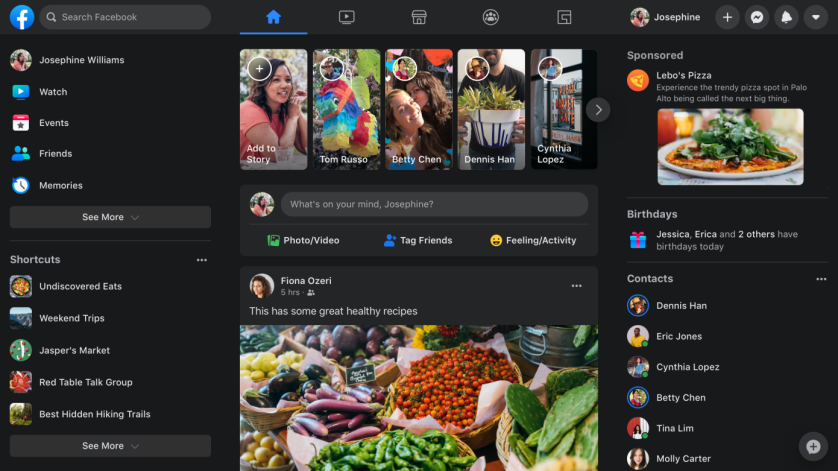 Who would have predicted that Facebook would be far behind other social media platforms when it comes to adopting the popular dark theme? The truth is that the social media giant has been on this dark mode testing thing for a while—enough time for the Lite version of the app to gain dark theme. Finally, Facebook rolled out a couple of desktop redesign today—offering dark mode, tabbed screen and a cleaner profile, TechCrunch reports.

To activate the new dark mode on Facebook desktop, simply go to the Settings Menu   -> “See New Facebook.” To disable it, users can return and hit “Switch to Classic Facebook.”

At first glance, I noticed that the new desktop redesign now offers streamlined navigation through tabs for Groups, Marketplace, Watch and more sitting at the top of the homescreen. The load time of the home page is now faster and does not take as much time as the old Facebook. As a matter of fact, it is now easier to find your way around the site with larger fonts and much improved layouts.

Earlier in the month, Facebook tweaked a couple of things and Messenger is a lot better—at least from afar. The Messenger app has come a long way since it was first introduced way back in 2011. From being just an app where you could only chat with your contacts by way of texts, you can now make video and audio calls, express yourself with amazing GIFs and many more. Ironically, all features added along the line contributed to some of the major issues the app has—navigation for example.

With Messenger, however, loading time slowed as time went by—the app became slower, and navigation became even more complicated. The changes that have now been introduced will make the app faster, smaller and simpler for everyone.

In fairness to Facebook though, the company did introduce a lighter version of the Messenger app a couple of years back. However, as good as that was, Messenger Lite with over 500 million downloads in the Play Store still lacked some basic features—users needed more than what the app could offer.

To make the app achieve speed and simplicity, Facebook said it reduced the core code by 84 percent—from more than 1.7 million lines of code to just 360,000 codes. The reason for this, according to the social media giant, is to make the app faster and more responsive. This, according to Facebook, will affect a couple of features—simply put, you won’t be able to use some features in Messenger—temporarily though.