When you publish your posts on social networks you want to make sure you reach as many readers as possible, there isn’t much point posting if you reach 1 out of your 1000 fans. The most basic method to achieve this is by posting your content when most users are online as each respective social network has a different demographic so timings will vary.

One thing you don’t want to do is post when everyone is asleep, so we will also go over when you should avoid posting your content as well. As stated the best times to publish are different from site to site, we will cover Facebook, Twitter, Google+, Pinterest and LinkedIn. 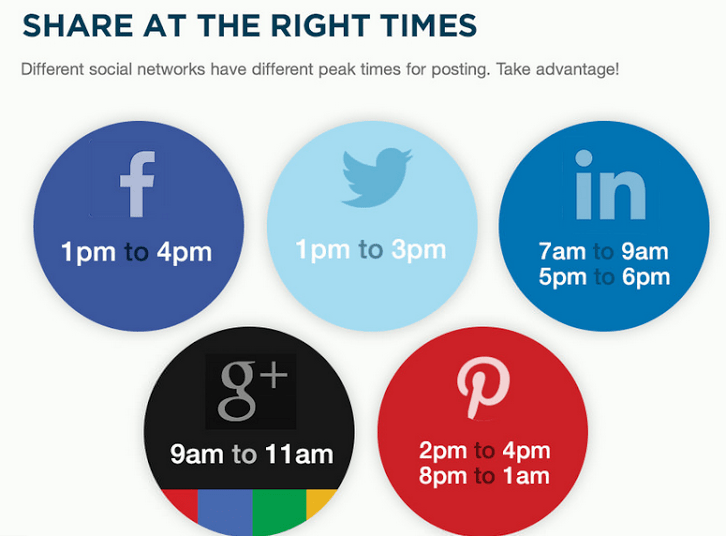 Facebook traffic starts steadily early on after 9am and peak time is Wednesday at 3pm. You should aim to post on Facebook from 1pm through to 4pm. Traffic starts to drop off after 4pm and you should generally avoid posting on the weekends. The worst time to post your content on Facebook is between 8pm-8am.

Twitter traffic starts to build after 11am with peaks days being from Monday through to Thursday, the ideal time to publish on Twitter is between 1pm-3pm. Traffic starts fading in the afternoon around 3pm, with the biggest drop being Friday after 3pm. Avoid posting on Twitter between 8pm-9am.

Google+ traffic starts to increase after 9am and peaks during work hours; your optimal time for posting on Google+ is from 9am to 11am. You should avoid posting during the evening as traffic starts to fade in the late afternoon around 5pm, the worst time to post is between 6pm and 8am.

Pinterest traffic gains momentum after 12pm and peak time is Saturday morning. The ideal time to publish on Pinterest is either 2pm-4pm or 8pm-1am. You should avoid posting during the late afternoon or more specifically between 5pm through to 7pm.

As you would expect with LinkedIn the ideal hours to publish are before and after business hours, which is between either 7am-9am or 5pm to 6pm. Peak traffic days for LinkedIn are Tuesday through to Thursday, whilst Monday and Friday are the lull periods. Always avoid publishing content between 10pm to 6am as traffic dies of both at 9am-12pm and 1pm-5pm.

The following times are a summary of the best and worst times to post for each Social Network.

Best time to post on Social Media [Cheat Sheet] – Times based on EST.