BBM app no longer available on the Windows Phone Store 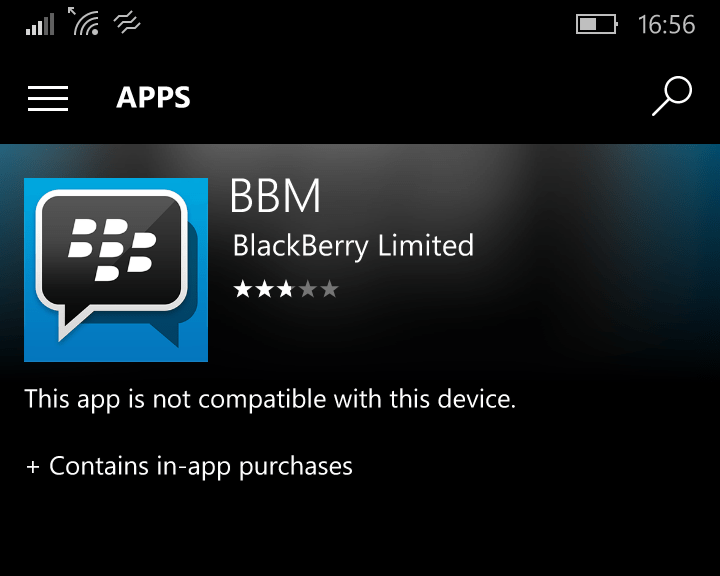 The BlackBerry Messenger or BBM app is no longer as appealing to many as it used to. It was quite a successful messaging app in those days and a lot of users enjoyed it especially in terms of keeping in touch with loved ones. Perhaps, its success was what encouraged BlackBerry to make it an all-platform app—extending it to Android, iOS and Windows platform. BlackBerry has pulled the BBM app from the Windows Phone Store, and users will no longer be able to install it on Windows phones anymore; however, the Android and iOS clients are still available.

No official explanation to that effect has been made by BlackBerry, and a report has claimed that the BBM app is now listed as incompatible with devices running Windows Phone and Windows 10 Mobile and users can no longer download it. Perhaps, an official explanation will be offered in the coming days.

The BBM app has lost its appeal and is no longer as appealing as it was back in the days—with users switching to other chat apps like WhatsApp, Telegram and the likes. WhatsApp is the mobile chat app on the lips of users all over the world. On Friday, the company announced that 100 million calls are being made on WhatsApp. This means things can only get better for WhatsApp, and could further confine the BBM app to the history book if BlackBerry doesn’t find a way around its dwindling fortune.

Still, more features are still being added in order to meet the needs of users—WhatsApp added a calling feature in April 2015. The feature was added to allow users on the WhatsApp platform communicate with one another using data on the mobile phone. The voice calling feature from what we have been experiencing in the last one year is a huge success. Now there are speculations that the company is planning to add a video call feature to enable its users make video calls to one another on the WhatsApp app.

Initially BBM was not a cross-platform app since it was restricted to BlackBerry phones. However, the popularity of the Android OS as well as iOS among users encouraged the company to rework its policy. It ditched its policy of adding users to BBM through PINs (BlackBerry Accounts) and embraced a more fashionable way of doing things by making it cross-platform.

What we cannot say at this time is if BlackBerry Messenger is ditching the Windows phones completely or re-strategizing.