The Barnes & Noble Nook Color’s price has been cut ahead of the expected launch of the Nook Tablet tomorrow, November 7. 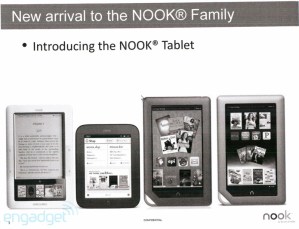 The Nook Color’s price has been dropped by $50 by Best Buy ahead of the unveiling of Barnes & Noble’s answer to the Amazon Kindle Fire.

The current price of the Nook Color on BestBuy.com now is now about $200.

Meanwhile, the company is set to unveil its Nook Tablet on Monday as an answer to Amazon’s recently-unveiled Kindle Fire.

The news comes from a specification sheet published by Engadget which revealed details about the Nook Tablet.

In the specifications sheet, Barnes & Noble touts the Nook Tablet as better than the Kindle Fire because of its dual-core 1.2GHz processor, 1GB RAM and 16GB internal memory expandable via SD card.

Amazon’s Kindle Fire, which the Nook Tablet will go head to head with, has a dual-core 1GHz CPU, 512MB RAM and 8GB internal memory, the document says for comparison.