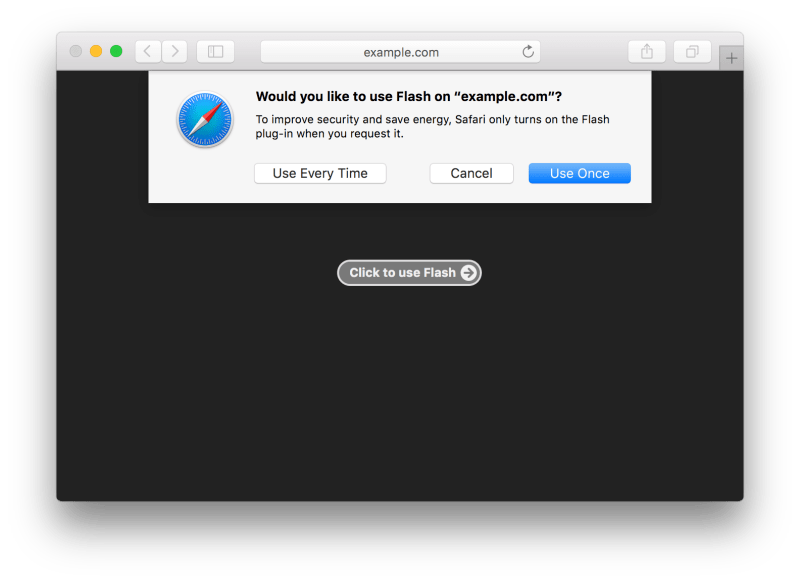 We knew this was coming—Chrome already informed the world of plans to deactivate Flash by default, and Edge already paused it for content considered not too important. Apple has announced that Safari 10 browser, which is expected to be shipped along with MacOS Sierra later in 2016, will make Flash inactive by default. In its place, Safari, just like other major browsers that have taken similar step, announced the integration of the more advanced HTML5 technology.

“By default, Safari no longer tells websites that common plug-ins are installed. It does this by not including information about Flash, Java, Silverlight, and QuickTime.”

It’s the Adobe Flash against the world as it stands, but no denying the fact that there are too many flaws around the use of it. Though, Facebook live streams and Periscope video will still be using it, the question is, for how long? With every major browser deactivating Flash as default, it is only a matter of time before HTML5 technology finally gets the nod.

For Safari users who visit websites that require or can use either Flash or HTML5, the later becomes the choice. This much was made known in a blog post on Tuesday by Ricky Mondello Apple software engineer. “On websites that offer both Flash and HTML5 implementations of content, Safari users will now always experience the modern HTML5 implementation, delivering improved performance and battery life.”

However, if the webpage uses or is limited to Flash, Safari will ask if you want to enable Adobe’s plug-in. You can also choose to make Flash the default for that website alone or choose to do so only when you visit. “If a website really does require a legacy plug-in, users can explicitly activate it on that website.”

This draws the curtain on Flash as the essential tool needed for running games and streaming media inside web browsers. Critics have descended heavily on the plug-in for its many vulnerability issues and especially how it drains your phone battery.

Apple banned Flash from its iOS software and mobile devices; this of course, set the stage for others like Mozilla, Microsoft Edge and Google Chrome to follow. Websites developers also started turning to HTML5 to create different types of multimedia content.

For Apple, this is just the beginning at it plans to ban Java, Silverlight and its very own QuickTime in order to make HTML5 the preferred video player.

In May, Google announced plans to discontinue the use of Flash as its preferred plug-in player for Chrome. The company said Flash will no longer remain as the default player for Chrome by the fourth quarter of 2016. Unlike Safari, ten websites were excluded from the lists that would not be able to use Flash as default.

The HTML5 is a technology that is fast catching up with a lot of web developers due to its fast loading time, which makes it more efficient and safer than the Adobe Flash Player.