Apple iPad Pro, rumored to come with a new chipset!

Even though their big event, where the new iPhones and the Apple Watch were introduced, was just consumed, Apple keeps holding the front page. According to a report from Taiwan, the Cupertino-based company is planning to release a new tablet soon, called iPad Pro.

Of course, a new tablet must come with a couple of new features and the iPad Pro is not an exception. First of all, it’s going to be the biggest iPad yet, as the display will measure no less than 12.9 inches. It will be very interesting to see how this new size will be received by the public, as Apple recently found out that most people would pick the 4.7″ iPhone 6 over the 5.5″ version. 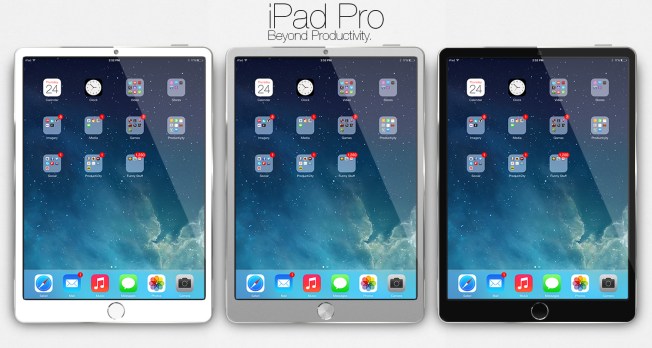 Still, the size won’t be the only premiere, as the iPad Pro will be powered by ay an A8X chip, way more powerful than the current A8, which can be found in both iPhone 6 and iPhone 6 Plus. The new and improved chipset will also boost the RAM to 2 GB. Also, a better graphics processor should complete the new features list, because after all, a 12.9″ will require way more power than a regular iPad.

According to the same source, mentioned above, Apple should hold an event in the last quarter of this year, where the iPad Pro will be introduced, alongside the iPad Air 2, which will apparently be the main attraction.