Virtual reality (VR) is about to go mainstream. This spring multiple brands will launch their VR systems, including Oculus Rift, Vive from HTC and PlayStation VR by Sony. With users inside the computer-simulated environments, how we experience and operate in the world will be forever changed. Here’s how:

Moviegoers will be able to go inside a film instead of merely watching from the sidelines. Film studios will create unique experiences far from what audiences expect today.

The onlookers will be put as close to the story as imaginable. They’ll be able to move around a scene, seeing it from various angles. This will be done with a pair of VR goggles and downloadable content.

The only problem is, going to the movies might not have the same appeal it once did. You’ll be able to submerge yourself in a movie from the comfort of your own home. This is exactly how video gamers will get to enjoy VR games, too.

This experience will extend to online content, whereby the visitor will be able to walk into websites and explore them instead of staring at a two-dimensional screen.

As for social media, some believe VR will humanize the platforms. It will empower users to not be faceless, voiceless entities. Instead they’ll move into and on to the VR environment, from all corners of the world, to communicate face-to-face in 3-D.

Your news will also change as journalism embraces VR. News stories will be able to take the viewer inside the event. This immersive journalism allows the viewer to be in the moment when the rocket takes off, the gunfight erupts or the race is run.  The viewers aren’t voyeurs, but rather witnesses.

This approach to journalism was pioneered by Nonny de la Pena. He developed a VR film for the World Economic Forum to place the viewer in the middle of a city square in Aleppo, Syria, when a bomb was detonated.

The New York Times also undertook VR with some help from Google. For the Nov. 7, 2015 issue, 1.3 million Google Cardboard viewers were distributed with the newspaper. The cardboard viewers were goggles that held a smartphone and created a near VR experience. It enabled the audience to watch and interact with an 11-minute short film, “The Displaced.”

Although there are ethics around presenting graphic and even horrific scenes, VR introduces a new and more engaging way to tell stories.

Medical professionals and institutions are adopting VR into their training and treatment practices.

Doctors and nurses can practice skills on imaginary patients in a VR environment, eliminating danger to actual patients.

When diagnosing, doctors can combine the MRI scans, X-rays and blood tests with VR trials to uncover the basis of medical conditions. This eliminates the necessity of an invasive surgery.

Psychiatry and psychology can also utilize VR when treating phobias or mental health issues. This can be accomplished through exposure therapy. In a controlled and safe environment, the patient can experience the event or interaction that causes them distress. The University of Louisville uses these techniques to decrease fears of flying and claustrophobia. 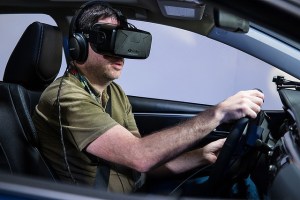 Forget going to the mall or the car dealership. Instead, you’ll be able to pop on a VR headset and get a firsthand experience with whatever you’re looking to buy.

If you want to buy a car, you can test drive one from inside your home. Not only that, you’ll be able to customize your vehicle.

You’ll be able to invite that friend who’s taste you trust to meet up in VR to give you their honest opinion on an outfit – making shopping more social.

Consumers will be able to interact with the product they’re considering for purchase, even before its done being manufactured. Product producers will share their process from start to finish.

This will provide potential consumers with more information and connection with an item. It will develop a greater appreciation for products and create a deeper and more genuine relationship between buyers and sellers.

Virtual reality has so much in store for us. It will take us on adventures we never dreamed possible, as well as make our daily lives more immersive with enriched information and services.

Megan Ray Nichols is a big fan of technology and gadgets. She loves blogging about innovations in science and technology.  Follow Megan on her blog, and on Twitter via twitter@nicholsrmegan.