European netizens have to think twice on what to post online starting now. Facebook, Twitter, YouTube and Microsoft agreed on Tuesday to remove hate speech on their platforms within 24 hours of posting and to report incidents to regulators.

The European Commission and the Internet giants signed a new code of conduct based on community guidelines, hoping to thwart terrorist attacks earlier following the Brussels and Paris attacks.

In the past few months, government authorities and regulators across the continent have been ramping up efforts to urge social media sites in joining their fight against the rise of online racism, even threatening to take action against the companies.

Although based in the US, the Internet giants have agreed to follow the EU’s decision to hasten their responses if illegal content is found in their platforms. The target is to scan through all shady material within one day of posting and remove or disable access to hateful content if needed.

“Social media is unfortunately one of the tools that terrorist groups use to radicalise young people and racist use to spread violence and hatred. This agreement is an important step forward to ensure that the internet remains a place of free and democratic expression, where European values and laws are respected,” she added.

Over the past few years, the jihadist group ISIS has been using social media to enlist new fighters for its cause – with a high level of success.

The EU code of conduct states that the Internet giants have to build stronger ties with civil society groups that flag up material egging on hate speech and violence.

In the past, social networks promoted free expression and refused to remove content or disable accounts, except for copyrighted material. Now they assure that the agreement will not compromise freedom of speech.

“We urge people to use our reporting tools if they find content that they believe violates our standards so we can investigate. Our teams around the world review these reports around the clock and take swift action,” said Monika Bickert, Head of Global Policy Management at Facebook.

“We remain committed to letting the Tweets flow. However, there is a clear distinction between freedom of expression and conduct that incites violence and hate,” said Karen White, Head of Public Policy for Europe at Twitter.

Although it’s a challenging task for tech companies to find the right balance between freedom of expression and hate speech, it’s encouraging to see that they are working together in addressing sensitive issues such as this. 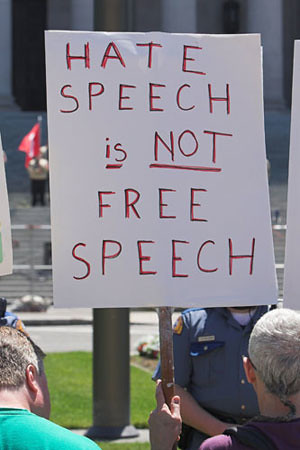 Got something on your mind to say or add to this story? Share it in the comments section below.